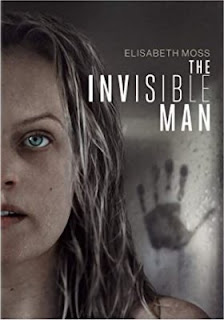 Are you looking for something to watch that will keep you on the edge of your seat? This might be the movie for you. I found it to be creepy, suspenseful and a really good psychological thriller. Our main character, Cecilia is involved in an abusive relationship with Adrian. The opening scene opens right into the storyline. We watch Cecilia, in the middle of the night, leaving Adrian. Every noise she makes, you’re fearful she’ll wake Adrian up. She does get out of the house, but that’s not the end. Cecilia finds out that shortly after leaving him - he dies. But she doesn’t believe it.  Then that’s where the movie gets very atmospheric. Who’s in the shadows? Is someone sitting in the chair? Are those footprints on the carpet? Just because someone says they’re dead doesn’t mean it’s true! This isn’t a horror movie, but it has a few good scares and jumps in it. There are also a few twists that I enjoyed, too.  It’s a little over 2 hours, but I was entertained and would watch it again. 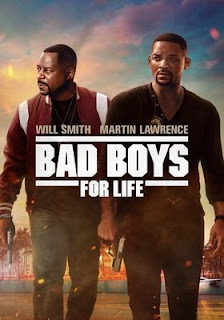 This is the 3rd in the series and I wish I could say I liked it, but I can’t really give it two thumbs up. I saw the first 2 over the years and they were fun. What made them fun was the banter between Will Smith and Martin Lawrence. They absolutely play well off of each other. With the new one - it’s like they forgot to bring the chemistry that made them “Bad Boys.” The movie starts out very violently and really didn’t let up. Yes, there’s always violence in these shows - but it seemed extreme this time. I liked some of the action sequences - but it just didn’t seem to click this time.  The story line focused on Will Smith’s character,  Mike Lowery, whose past comes back to haunt him. Martin Lawrence’s character no longer wants to be a “bad boy” and retires after Mike gets shot. Mike can’t let go of it, and as he unravels the truth, we find out the double life he once led.  I wanted to like it so much more than I did. But it forgot who were the “bad boys” and just made them “old boys.” 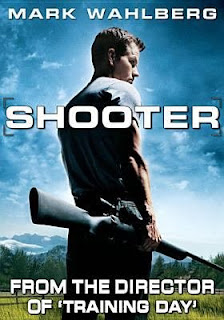 Mark Wahlberg is one of my favorite actors and he didn’t disappoint in this movie. Shooter came out in 2007 - not sure why I’m just now watching it, but am glad I did. Very good movie with a good storyline and great actors. Mark Wahlberg plays Bob Lee Swagger, an ex Marine. He’s not just any marine, but a top notch marksman - a sniper whose skills are unmatched.  He’s living in exile after losing his best friend until a colonel asks for his help. The President of the United States might be assassinated in the next couple of weeks. They need his special skills to prevent this from happening. Well, all is not what it seems and he finds out he’s just been set up as the one who fired the shot at the president. From there the movie is on the run! How do you stop a marine who’s out to clear his name and how high up do the dirty politicians go? Lots of action. Lots of payback. And with Mark Wahlberg doing what he does best... you can’t go wrong. 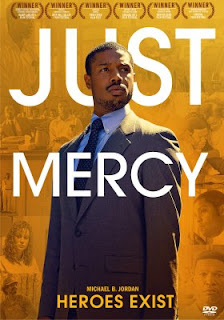 
I’ve always been interested in stories of people that are wrongly accused and convicted of crimes, especially those on death row, which is what Walter “Johnny D” McMillian (Jamie Foxx) is in this film.  He is given hope when a new graduate from Harvard, Bryan Stevenson (Michael B. Jordan), comes to Alabama to defend those that were never given a fair trial and have been sentenced to death.  It all turns out to be much harder than he ever imagined, no matter how much evidence there is proving their innocence.  The racism and corruption is almost overwhelming, but Stevenson won’t give up until McMillian is given some form of justice!  I thought this true story was very powerful!  It was emotional, strong, moving, heartbreaking at times, and really captured how unscrupulous and ruthless the legal system can be to those that are presumed guilty and aren’t able to adequately defend themselves.
Library Link: Just Mercy (DVD) 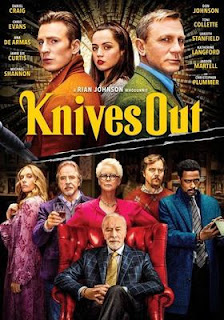 Now that you know who is in it – you might be disappointed by the movie itself.  It is billed as an Agatha Christie type movie, so how can it go wrong with a description like that?  Well for me, I found it very disappointing. I thought the movie was long, drawn out, boring, and anti-climactic.

The setting is a Victorian style house where the wealthy and famous father and grandfather, Harlan Thrombey (played by Christopher Plummer) was found dead.

Who did it? Was it one of his three children? His grandchildren? His daughter-in-law or maybe the caretaker?  Who was going to inherit all his money, his estate and his book publishing corporation?  Enter Daniel Craig as the southern talking detective named Benoit Blanc.  At this point, I was done.  His character was “so” annoying it was a distraction for me, from the story.  Aside from that, the story became flat and boring.  It just weaved in and out of different characters and why “they” might be the one.  I felt like it didn’t really throw in too many different options of suspense and I felt it wasn’t hard to figure out who did it.

I guess I wished there had been more “suspense” and more “on the edge of your seat” storyline.  They were trying for Agatha Christie and it was more like Columbo. 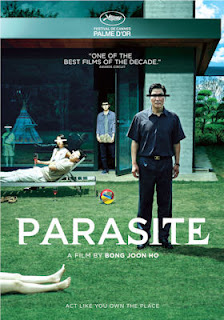 I wasn’t planning on watching this one until it won almost everything at the Oscars this year, including Best Picture.  I don’t want to give spoilers, but the story starts out with a very poor family that is able to get themselves hired to be the servants of a rich family, posing as unrelated, qualified applicants.  They do this through tricking the rich family into firing each person one by one that works for them and getting themselves hired.  It almost feels like some sort of “heist” movie in the beginning.  Everything was going smoothly until the housekeeper that was let go returns while the owners are out of town and says she needs to get something out of the basement.  Besides the servants just hanging out at the house and acting like they own it while everyone is gone, and then the housekeeper showing up, they get a call that the owners are on their way home and are only 8 minutes away.  This is when the “real” movie starts and creates twists and turns I never saw coming.  The more deception there is and the more lies that are told, the more tangled up everything gets and just ratchets up the intensity all around!  As the film goes on, there is something from almost every genre of movie – comedy, drama, mystery, thriller, romance – you name it, it probably has it.  The language is in Korean, so it was a little different reading subtitles for the whole movie, but I got used to it.  Not sure if I would have picked it for Best Picture (think I would have gone with Joker), but it was a decent movie with a good story and a lot of suspense if that’s what you like.  Glad I watched it! 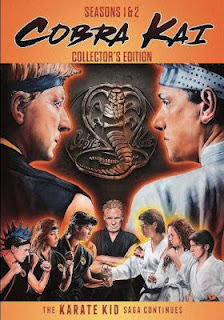 I was excited when I heard about this series, but not too excited, because I didn’t want to get my hopes up and be let down.  As a fan of the original film, I was not let down at all – it was GREAT!  The story is basically showing what the characters from the original Karate Kid movie are doing now – 35 years after the 1984 All Valley Karate Tournament where Daniel LaRusso beat Johnny Lawrence for the title.  Johnny’s life has pretty much fallen apart and it all seems to go back to the day he lost that tournament.  Daniel’s life looks like it’s the complete opposite – almost perfect and goes back to him winning that day.  When Johnny witnesses a kid being picked on and helps defend him, he gets the idea to get his life back on track by opening up his own dojo and reviving Cobra Kai, helping all of the outcasts learn to fight and defend themselves.  He’s also grown and matured over the years, realizing that “There’s a difference between no mercy and no honor.”  He’s not the jerk he was in the original movie and the lessons he’s teaching are more positive than he learned from Sensei Kreese, who shows up for the second season.  I usually don’t like shows that go back and try to “replay” the same types of scenes from the past, but this was different – IT WAS GOOD!!!  I was transported back to 1984 – in the present!  This one definitely exceeded my expectations!!!!!!!!!!